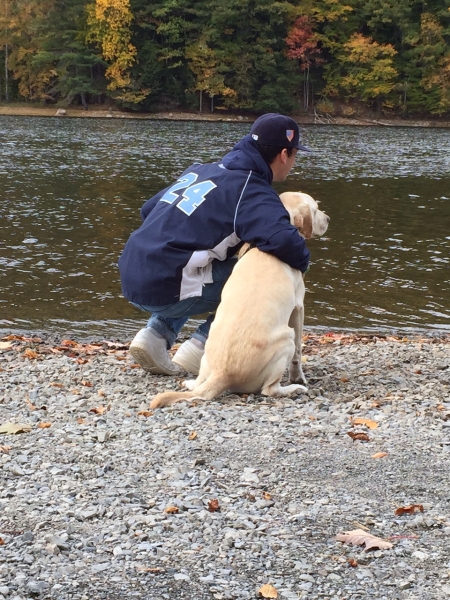 I love my brother Colby.  He really knows how to have a good time.  We wrestle and play ball.  He even drops things when he’s eating which is AWESOME!  I know he loves me too because he shows me all the time.

In the morning I hear his footsteps coming down the stairs and I know it’s him.  My mom walks kind of slowly, my dad’s steps are more heavy, but Colby, HE RUNS DOWN THE STAIRS LIKE I DO!!!  The first thing he does is let me out of my crate and gives me my breakfast, he also gives me just a little bit more food than anyone else does.  He’s AWESOME!

When I’m finished eating all I have to do is rest my head on his leg and he gets right up to take me outside.  He lets me smell everything!  When we are walking and he walks towards home, I just pull him in the direction that I want and he takes me.  I can pull him wherever I want, kind of.

After our breakfast walk I know the drill.  He likes to take a shower and get dressed.  I wander around downstairs looking for shoes or a napkin.  Mail is good too…I’ve been known to rip up an important letter or two in my day.  When he’s putting his shoes on, it’s time to find my ball.  I never remember where I left it last so it takes me a while.

If Colby goes to the refrigerator …I know our playtime will be soon after he finishes his breakfast.  Most of the time when he is eating alone, he watches T.V …it’s a great opportunity for me to beg. He doesn’t pay attention to what he’s eating so he is sure to drop something on the floor.  If he gets up to get a drink…I can lick his plate without him knowing.  I love eating with my brother.

Playtime is the BEST!  Wrestling has no rules.  He tries to flip me over but I wiggle out. When I do, he’s on the ground.  I can pull his shirt or the shoelace on his sneaker.  The string on his shorts are the best because it makes them really tight!  He doesn’t like that too much but I do.  When he gets his clothing out of my mouth, he runs.  I LOVE this because he’s really fast.  But so am I.

Playing ball is my favorite. The rule is….he throws the ball as far as he can and I find it and bring it back.  I know exactly where it goes most of the time. Every once in a while, I miss my mark, but only for a second because I sniff it out! That can be very tiring. My mom plays ball with me too. She tells me I have to stay, she throws the ball and then tells me to find it. Don’t get me wrong, I love my mom and dad too.  But they aren’t as much fun as my brother.

A little while back it was a normal morning, at least I thought it was.  I went down to Playcare like I usually do and things were fine until Colby came in and sat down with me.  He kept hugging me and rubbing my head.  Something wasn’t right.  He didn’t want to play he just wanted to hug me.  He kept saying something when he was hugging me but I didn’t understand what he was saying.  After a few minutes he walked out of the room.  I jumped up on the desk to watch where he was going.  He got into the car with my mom and dad.  He didn’t come home that night.  I looked and looked but his room was empty.

I don’t know where he is but his room still has his smell in it.  Mom keeps the door open so I can go in there.  I don’t hear his footsteps and he never feeds me.  Playtime always consists of mom making me stay while she throws the ball.  Nobody wrestles with me.  I wonder when I’ll see my brother again.