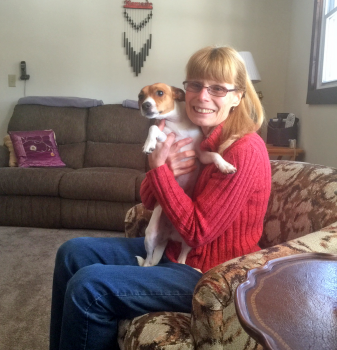 I recently adopted a dog from the shelter in Corinth and 2-year-old Bailey is a wonderful addition to my home.   Bailey was very tentative and submissive and it became clear pretty much right away that I would need help with training her to become a more confident version of herself.

This is where Jody Cracco, from Doggy Playcare came into the picture.  Jody came to my home to help me become a good leader for Bailey.  When we first started, Bailey would not even come out of her crate when Jody was in the house and so our lessons consisted of Jody being “the dog” while I practiced the commands.  Now after four lessons, Bailey does not run into her crate anymore and for the first time took a treat right out of Jody’s hand.

Thanks to Jody’s caring and patient manner both Bailey and I are growing in confidence together.  Jody has a wealth of knowledge about dogs and their behavior that I have found both fascinating and highly useful.  In between lessons, she is available by e-mail, text or phone for any questions that arise and she is very prompt in responding to messages.  I would highly recommend Jody and Doggy Playcare for anyone who wishes to learn more about their dog and how to be the kind of leader he/she needs.