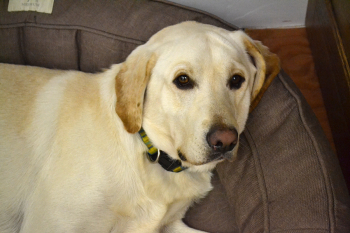 My name is Briggs and I’m almost 5 years old. Every day is a great day for me. I guess you could describe me as a bit crazy about EVERYTHING! As far back as I can remember I felt excited about everything I saw, heard, smelled, ate, and especially people! It’s a great feeling to me but for my humans….not so much.

The earliest memory I have is laying in my crate looking out the window. I was very high up and when I looked around there were buildings everywhere. When I looked down, I could see people….a lot of them! By the time my human came home I could hardly hold in my excitement. I would yell and yell trying to tell them how happy I was. They must have been excited too because the first thing they would do was open the door to my crate. I felt like I could run a million miles per hour. And I did! I especially loved jumping on the couch, pulling the pillows off and flying off the end of it. My human liked it too, he would chase me screaming, hands flying, and I always ran faster!

It must have been a week or so later when my human took me out for a walk, only it wasn’t the route I knew. We walked for about 15 minutes and came upon a store with a bunch of barking dogs. I was trying to listen to every one of them but there were too many of them barking at once. It wasn’t long before I was being led right down the middle of this craziness. When I looked up at my human, I noticed that he wasn’t there. I wasn’t sure who was walking me.

I was brought to a place with a cold floor. I wasn’t sure why I was there or where my human was. I was waiting a long time before I started to realize that I would probably never see my human again. People would walk around the door and look in on me. I love every human so much that I would run over to them and jump as high as I could so they could see how talented I was!
One day a human peeked into my little room. It was a human with long hair and a high voice. She was talking to me but I didn’t understand what she was saying. We went for a ride in this big car…I was so EXCITED!!!

When the car stopped, I heard a lot of barking dogs again. This place didn’t look the same, but the floor was just as cold as the first place, I was used to that by now though. My front legs started itching so I scratched them with my teeth. Both of them would itch and I would scratch and scratch and SCRATCH. Nothing stopped the itch and after a while they started to bleed. Licking them made them feel better.

This new place was different from the old one. They had play time and I made some friends. It was really cool! There isn’t much to play on but it felt great to get out and run. Some of the dogs were really, really fast! One of them was ME!

One morning when I woke up I couldn’t stop coughing. I thought the fresh air would help but once the humans heard me, they wouldn’t let me outside. My legs started to itch again.

My cough seemed to get worse and I heard the humans mumbling something outside my door. Later on that day I was put in a crate in the back of a truck. It was a long ride to my next home filled with barking dogs.

This new place was dark and had the same cold floor. My room wasn’t very big and I never got to go outside. My legs itched and they made me eat this gross stuff. One of the humans who came in to clean wasn’t very nice. I’m not sure what his problem was but he acted like I was gonna bite him. He would yell something really loud and raise his hands up over his head like he was gonna throw something just so I would move over. I was afraid of him.

It wasn’t long before I stopped coughing and I didn’t have to eat the bad tasting stuff. The human who cleaned didn’t come by as much either. There was a lot of banging noise and plastic hanging from the ceiling. I tried covering my ears but it didn’t work. My legs itched. I noticed the hair was gone on my legs and they were bleeding again. Licking them made everything better.
It was cold outside the next time I moved. I was put into a crate in the back of a truck and this time the ride was even longer. The human who was steering was smoking something that smelled so bad I thought I was gonna start coughing again. Licking my legs even made that more tolerable.

We stopped FINALLY and I got out. There were so many smells, but no barking dogs. There was another human who came over to the man who drove me and took my leash. This one had longer hair and it was my color. She smiled at me and we walked me away from the smelly man. I felt like showing her how high I could jump….and I did! I was smelling and jumping and barking I was SO EXCITED. We walked toward the big building and went inside. There were no dogs barking!!!! I didn’t feel sure….I wanted to lay down and lick my legs. The human patted her knee and said something to me so I followed. She took me over to another nice human who gave me a bath. I LOVE BATHS! When I was done I got a new harness and food and a new bed!!!! This is all very, very different.

Until next time….I can’t wait!