Can We Talk Cat For A Minute?

Please tell me if I’m crazy but these cats want us to chase them, right?  I mean, they stop, freeze, take a step ever so slowly and then ZOOM, they’re gone!!!  If this isn’t an invitation I don’t kn 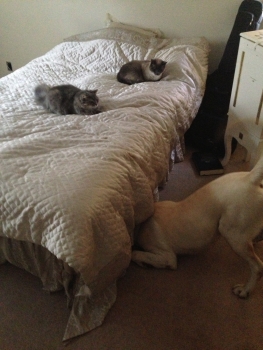 ow what is. The problem is that I’m the one my mom calls when we’re running.  I’m the one who gets a time out…I’m the one she blames when the cat starts it!  It’s been like this from the very beginning.

The first night that I was home Lilly peeked around the corner….I had never seen a cat before! I wanted to introduce myself but she ran. She was fast but I was right behind her!  She ran under the bed in the room upstairs.  I tried to reach her to tell her my name but she was gone in a flash!  As I was backing out from under the bed my mom grabbed my collar.  Back in time out.

That first night I couldn’t stop thinking about the cats that I now know to be Lilly and Marley.  Lilly is a long haired gray cat and Marley is short haired, kind of grayish with blue eyes.  I wanted to play with them really bad.  I couldn’t wait to see them again.

The next morning as soon as I woke up I ran around the house looking for them.  They were nowhere to be found!  I looked under the bed, in the closet, in the basement.  Oh by the way….they leave their poop in a box right out in the open.  I tried to do everyone a favor and eat it up but that wasn’t a good decision either…yup, you got it, back in time out.  The look on my mom’s face when she smelled my breath was odd.  She wrinkled her nose and blew out of her mouth.  If she would only try some she would understand.

After a few more times of our chase game, my mom decided to close off the house.  The cats had the front of the house, the basement and the upstairs, and I had the family room, kitchen, dining room and mud room.  It stayed that way for a long time.  I didn’t see much of the cats and I guess it was a good thing.  I kind of forgot about them until one night when the basement door opened.

Marley peeked her head through the door.  I didn’t know what to do.  I felt like I was gonna panic.  I was frozen!  She didn’t run, she came towards me.  Oh my gosh…..what was I supposed to do???  As she got closer I got more jittery.  Was she gonna chase me?  Was she gonna scratch me?  I closed my eyes and all of the sudden I felt her put her head on my leg and rub one side of her face on me.  What the heck…I think she is trying to hug me!

I couldn’t stand there any longer so I walked away very carefully and she came with me.  She was walking around my front legs as I was walking.  It was freaky!  When I stopped, she stopped.  When I walked toward my crate so did she.  This was getting too weird.  To tell you the truth, I really kind of liked her, she was sweet.

It was a long time that I lived in the back of the house and a lot had changed.  I could tell that my mom didn’t like having all of the doors closed all of the time.  One day when we came home from Playcare the doors were open.  Marley came out to greet me and I smelled her butt as usual.  Mom called my name and I stopped. There was nothing out of the ordinary other than all the doors were open.  I saw Lilly peek around the corner and I chased her but mom called my name and I stopped. This became the norm and it was no big deal.

I don’t care what anyone says.  Cats like to be chased.  They ask for it!  It’s not normal to look at you square in the eye and then run away!  I guess I’m used to it now, they have become my best friends, although I do still chase them sometimes when mom isn’t around…don’t tell her.